Before Losing Money With Paid Ads, Consider The Current Situation With Privacy Lawsuits

Paid ads are useful, but shouldn't be the first marketing approach. Companies are getting lawsuits for privacy violations. They defend themselves by saying it’s a normal practice in the industry. This argument is posing a great risk to all businesses that operate similarly.

People are more aware of privacy being violated and they decline the use of their data, which is the oxygen of rentable paid ads.

It might not be directly related to your specific industry but this is what happened:

In the month since a federal appellate court revived a 2019 lawsuit against ad tech firm NaviStone for invasive targeting practices, 10 more lawsuits have been filed against various companies for similar privacy violations.

The lawsuits aren’t just against ad tech companies: Zillow, Expedia, and Chewy.com have also been named in privacy suits.

Paid advertising norms are at risk:

Companies that have been subject to ad tracking lawsuits have offered a similar response—that the practices they’re being sued for are common across their industries and the internet at large, and that litigation poses a risk to all businesses that operate similarly.

When NaviStone’s lawsuit was revived, it replied by saying the decision “will reverberate nationally and could lead to significant civil liability and possibly even criminal charges to countless modern commercial, educational, and governmental websites throughout the United States.”

Kochava responded similarly when it was named in an FTC lawsuit last month. Upon being sued for selling data that could be used to track customers’ locations (including sensitive health info), Kochava said the FTC “has a fundamental misunderstanding of Kochava’s data marketplace business and other data businesses.”

Now, those fundamental business practices are being challenged. Litigation from both private citizens and the federal government will force businesses to interrogate and adjust their data practices to meet changing standards.

Actions That US Teens/Adults Have Taken to Address Data Privacy and Security Concerns, Q1 2022 (% of respondents) 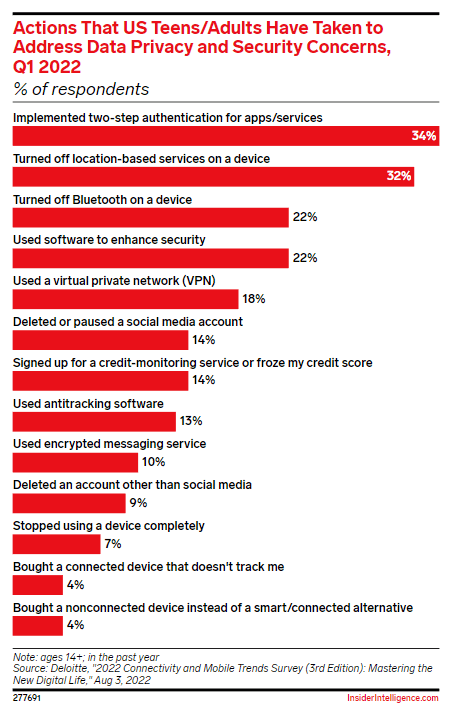 How we got here:

Since the overturning of Roe v. Wade, the federal government has turned its eye to the advertising industry, where a series of high-profile incidents exposing women seeking abortions have highlighted just how detailed the information is that advertisers collect on citizens.

The crackdown on data privacy comes at a tricky time for the ad industry, which still hasn’t found a suitable replacement for Apple’s Identifier for Advertisers or the upcoming deprecation of third-party cookies. Those changes have cost companies like Meta billions in lost ad revenues and led to widespread advertising layoffs despite an overall increase in US jobs.

One solution to the changing privacy landscape has been anonymized data. Privacy-oriented data sets have become a key point of distinction for companies trying to snag market share like NBCUniversal and others, and are sought out by advertisers looking to comply with regulatory standards.

But there’s doubt about just how anonymous that anonymized data truly is. In 2019, a European study found that it was able to accurately identify users from anonymized data based on just a handful of geographic indicators.

Attempts to skirt around changing standards have ended poorly. Meta’s latest fire to put out is a class-action lawsuit that emerged after it was revealed the company was injecting tracking code into its in-app browsers in order to circumvent Apple’s AppTrackingTransparency policy—another change that has damaged advertising effectiveness.

Legislation for privacy reform has bipartisan support, even if it leaves loopholes for law enforcement. As litigation stacks up and privacy becomes a more fraught public issue, a crucial legal decision looms on the horizon that will affect the future of digital advertising.

How to save money and optimize your investment return?

Paid ads are displayed to people who are probably interested in what you are advertising. People who Google for a solution to their problems are approximately 70% more ready to buy compared to the conversion (i.e. doing a payment or commitment transaction) percentage of an ad.

78% of consumers prefer getting to know a company via articles rather than ads.

Content marketing is quickly becoming the best way to attract and convert these customers.

Find out what content you could share for your potential customers with our FREE Psychedelic Therapy Business Growth Potential Report here.